Everything resonates on earth. Sounds are disturbances in air pressure, having an accidental origin and expanding in circles over areas, wide or small, fast or slow. When we connect singular sounds, we hear different structures emerging from their coincidental parallel emergence. Music is invented day by day, minute by minute, tik by tak. Travelling through different spaces produces different resonances, and so music is constantly changing. Sometimes people go to other places for work and leisure. They hear a different music while doing so. Hence, a travelogue about music today as all of us are moving constantly in all directions on earth. Yesterday's conversation with Petr was about the earth and sound, music. With this in mind, browsing through last month's notes and recordings, about concerts and performances, talks and experiments, should only reveal the diversity of our common culture and existence on earth. And the relatively small differences with which we like and appreciate these phenomena. Writing about moving around and listening over a time of 2 months, the memory becomes a filter, inducing an uncertainty whether the situation was like this or that, and how much was imagined. To remember is to look back, so this travelogue is going backwards through time. 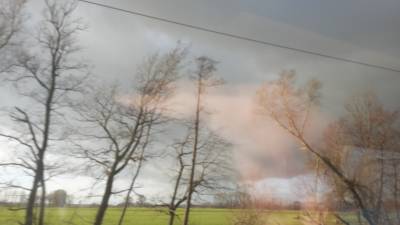 Coming home, the 3 secondhand books that were ordered at the end of last year all had arrived. Principles of Linguistic Change by William Labov: 1994, 2001, 2010. It provides an overview of aspects of language change, and are part of what in science is called 'future linguistics'. Three books, 2100 pages of speculation how we will talk and think in the futue, let's say 50 years from here. The linguists admit that they cannot really find out the next step of a language when only looking at principles from the past. They seem to disobey any linear prediction because of social and cultural, but nowadays quite intrusive media events. On top of it, widespread changes do not affect all forms completely, there will always be relicts from the past that remain and escape categorisation. Alongside came the LP version of the download of GP&PLS (or: Goodypal & Pals) LP. It came nicely packaged and decorated. Who are these Pals? As they describe themselves, “Gp&pls is a refugee organization disguised as a tech rock band”. The album plunges you into a couple of hours of energetic ecclectic and avantgarde music, played and sung, shouted out, with poetry, with slogans from pamphlets or personal experiences, love and hate, and played on all kinds of instruments and objects. It is a collective thing, with a re-definition of a band, together playing music with conviction, opinions, sentiments and an uncompromising aesthetics. They bring, in their own words again: “pure anti-totalitarian communism”. All the money they make with the LP is going to the stranded refugees on the European border: “Money for border-crossing tools, such as shoes and clothes when you have to hide in the forest for days, bandages and medicine for when police have beaten you up. Cellphone and credit so you can gps your way into EU and you can keep in contact with your family and friends at home.” They work together with the artist Goodiepal and definitely got really inspired by him. Have fun and get inspired as well: the album you find at https://groovecafe.bandcamp.com/album/100-pro-monarchist-x-tra-kone-radio, as well as a podcast https://www.are.na/blog/radical-digital-painting, and from there, discover many more things! 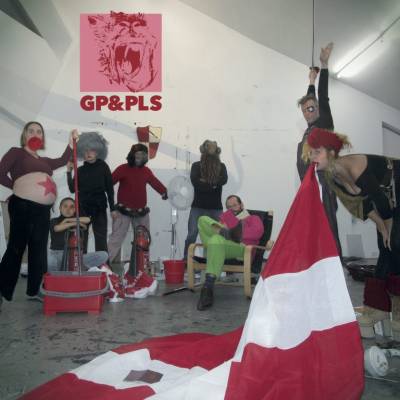 Who is this artist Goodiepal? Goodiepal or Gæoudjiparl van den Dobbelsteen, or Parl Kristian Bjørn Vester. Goodiepal is a Danish/Faroese experimental electronic musician who had some years ago one of the weirdest releases on the Mego label. For a while he has been teaching composition at DIEM, the Danish Institute of Electro-acoustic Music) in Aarhus Denmark, and even toured worldwide with his ideas of Radical Computer Music, writing a 500 page book about it. Some of these ideas seem continued in his current life as an artist: his future thinking, his redefinition of the socio-political and cultural ideas and forms, and his collaborative approaches. In 2014 Goodiepal sold his DIY velomobile 'Kommunal Klon Komputer 2' to the National Gallery in Denmark. Invited to venues, performances, lectures, actions, no one knows when he will show up, but then again, arriving, he performs from the batteries he charged on the road, or something like that. If you are getting interested to find out more about the artist, there is a nice documentary about him, the Goodiepal Equation http://www.thegoodiepalequation.com, or watch the older “A Day in the Mouth episode 5”, both by Sami Sänpäkkilä https://vimeo.com/44405488. Also his “Official Mort Aux Vaches Ekstra Extra Walkthrough” composition https://soundcloud.com/goodiepal-gaeoudjiparl/the-official-mort-aux-vaches-ekstra-extra-walkthrough and the Mego release EMEGO-211 http://editionsmego.com/release/EMEGO-211 are online available. 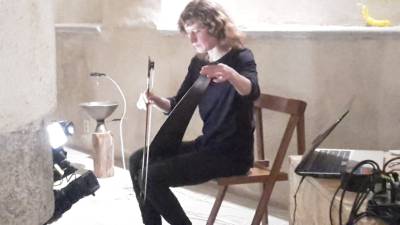 Some people you find in unexpected places. At the finissage of the OGV Jihlava exhibition in IGLOO, their sound gallery, Veronika Svobodová had invited a friend to play a live audiovisual performance. “The Belgian-Swedish filmmaker and visual artist Oona Libens can be situated somewhere between expanded cinema, performance, sound art and pre-cinema visual trickery” the introduction says. The first part was a projection-puppetplay combination, but then it evolved into a silent noise piece with Veronika's low voltage motors, attached to objects in the space, and Oona on singing saw. A delicate and fragile performance for a small audience in the cellar of the gallery. Like said before: unexpected. More information about Oona's audiovisual work you can find in a longer interview for The Word magazine http://thewordmagazine.com/art/portfolio-reports/i-would-like-to-interrupt-todays-machine-gun-of-images-for-a-moment-oona-libens-questioning-of-todays-imagery/ 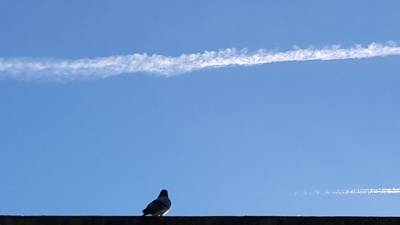 Motors are in fashion again it seems. A couple of days ago, Ján Solčáni sent an email saying “Now I am scrolling AliExpress looking for DC motors, guitar sensors, speed controllers and million small parts. Full of all the magic minerals and metals whose mining is killing pandas. And today I also sent the master of new Skupina album for release!”. (Now you know it too, the word is out! Skupina is having a new release soon!). One afternoon we met in Blumencafé in Schoenberg or Pankow in Berlin, talking about SolarAmps, using FM transmissions instead of cables, to make a music performance mobile and spatial. Everytime we seemed to say something serieus, the 2 gigantic parrots in the café started to scream out loud. We tested it saying phenomenology, deleuze, classical music, and many other hidious words, and everytime the parrots started a deafening loud protest concert. Also the inventive percussionist Tatiana Heuman was present, we all drank coffee and were testing the parrots. Since I did not know her work, Ján sent me some links and TBH somehow while writing I am enjoyig her band's latest release https://ricarda-cometa.bandcamp.com/album/ricarda-cometa-2. On the way back in the street there was a music magazine that mentioned Teenage Engineering and the release of their so-called “poor man's modular”. The Pocket Operators are nifty cool pocket calculator size drum machines, and some sound really great, so I was wondering what this thing would be like. There is a video online with someone operating the thing, as a documentation to the recent NAMM 2019 fair. https://www.musicradar.com/news/namm-2019-teenage-engineering-introduces-the-poor-mans-modular-with-new-po-synth-range. 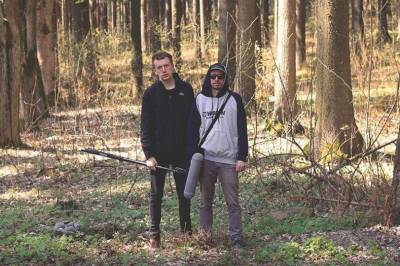 Thinking about the reversal these days (it used to be different: airplane travel for the poor, and train voyages for the richer who can afford a smaller carbon footprint), I set out to make a new journey to the west. First a train to Berlin. Then it took 12 hours to get from Berlin to Brussels by bus, due to a general strike in Belgium. Time gets forgotten while sleeping, writing, thinking. And reading a translation of The Golden Age by Michal Ajvaz, which is all about music, sound, language, texts and traveling. On my computer there was the upcoming Kraak Festival mixtape, and was sort of enjoying the non-orthodox music while landscapes would fly by https://www.gonzocircus.com/mixcloud-monday-kraak-festival-2019/?utm_source=newsletter-988&utm_medium=email&utm_campaign=Newsletter-988. Some days before, I had met up with Kristen Reese in a teahouse. Our ways seem to cross once in a while, but then again when you have to perform both at different places at the same time, there is usually not so much time left to attend each other's concerts. To make up for this I also had her Creatures and Signals piece with me, from a live performance I had missed on Teufelsberg the previous year during the Dystopie festival http://kirstenreese.de/creaturesandsignalse.html. The piece is a wonderful mix of manipulated animal and electronic sounds. https://soundcloud.com/user-560770721/2018-kirstenreese-creaturesandsignals. Arriving in Brussels much later than expected, the Kokoko concert at Les Ateliers Claus which I had been looking forward to attend, was finished, but a few days later they would play another gig at the same place. Last year they made an intriguing video https://www.youtube.com/watch?v=7QwjURBSIPA. Live they are developing the same energy and engagement. Kokoko is a kind of Congolese street band that in the true old Skiffle tradition is making their own instruments with everyday objects. No, these days there are no broom sticks and wash basins available, but Kokoko has a drum made of plastic oil cans and a DIY built electric guitar, enriched with computer parts. Some days later at the same venue, another quite energetic and original band from France was performing: Mamiedaragon. More than a year ago they released a poetic and radically nonconformistic yet very charming series of songs https://nolagosmusique.bandcamp.com/album/mamiedaragon-no-vinyl-m-t-o-ch-rie-faut-que-a-redescende, The performance was somehow more conventional, 3 girls (drum, bass, guitar, vocals) 1 boy on casette tape manipulation and voice effects. It was different but in a sense not disillusioning, rather delivering the music differently with a more simple setup.

Home again, and I'd like to be here when I can, like the song says… Straight into the decompression room. Adaptation to climate, and habits, learned over the years, now disrupted. Taking up where we had left off: some music that was not or half finished, backups of recordings before, writing reading sleeping thinking like on the trains. What did I do before I left, suddenly into a black hole or a thick mist which is slowly evaporating and disappearing. The days are lighting up. Looking at the books lying there on my desk before leaving, 2 weeks ago and wondering: who is interested in this? listening to Sofia Says by Gaël Segalen https://coherentstates.bandcamp.com/album/sofia-says and after 2 weeks still thinking: yes, nice pieces… 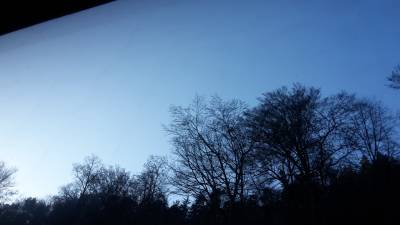 Oh Oh something has to get off my heart. The last travelogue was out last winter, meantime Alex Adriaansens has died, and though no one will really remember him personally somehow he was a remarkable and influential person for the arts today. Being most of his life involved in V2 (originally in Den Bosch and still in Rotterdam http://v2.nl he might have been the most prolific person supporting new media art actually around the world. Some people might call him a chameleon, changing along media, but no one can deny his integrity and his radical opinions, his enthousiasm and optimism, even when things did turn out differently. He was a living example of how a too pragmatic culture could make the difference in this world today. When I told MT from Praha around Sylvester about it, he replied with a defaitist statement: “ja leven is langzam dood gaan of niet?” which means as much as “yes living is slowly dying, or not?”. I don't agree and believe living is about expressivity and interacting with a world even if it is just for undestanding it. Alex certainly did more than this and was supporting anyone making the difference today. http://v2.nl/archive/articles/alex-adriaansens-1953-2018 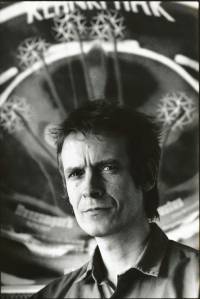 It is getting warmer, soon the grass and nettels will start to grow. Here and there some patches of ice and snow are remaining, at least in Vysoěina. But the sun is giving off more warmth. What is this light and how can we perceive it today through instruments and media? How can I measure the UV, infrared, and what is the structure of this visible light? Is it everywhere on earth the same? Can we hear the light from the window? https://www.youtube.com/watch?v=WnpcTsy10dE

Never mind, let's discuss it next time on the road, soon…