Weather Reports is making you all-weather-ready by providing world class weather breaking news plus your up to the minute weather reports about the accurate future conditions of your environment, local to international, wherever you want to be. Including imperative disaster coverage. Just listen to this radio and get a taste of walking the windy shores barefoot in the burning sand, running through the fields on top of the hill during a hot summer thunder storm, or sitting in the park getting dripping wet under a leafless tree. Get your daily Weather Reports now: undocumented, raw, but unpredictably vital! 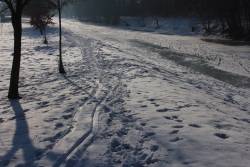 1. Observing the weather (ears and eyes from elsewhere)

Maybe an interest that shifted, while working with wind-sensitive devices over the years, to the phenomenon of wind itself, the play with different materials, generating a variable resistance. Relating it to our senses, how we all experience weather, with our body here and now, walking, running, sitting in the grass or snow. Feeling the difference on your skin while it rains as well, when the directions of the streams of cold air are suddenly turning. The first warm winds between spring and summer. Seasons and years pass. Abandoning gradually city life for staying out there. Watching the tops of trees from the window. Setting up yet another lab on the open field. But for different reasons… (Full Notes)

The sentences above are embedded in a series of questions, investigating nowadays media instruments for perception and expressivity. It will always be a purely technical issue. WindClock-III is going a step further than the previous designs, and wants to come up with an easy-to-handle DIY weather station, to set up anywhere and quickly share relevant data from remote locations. These can be rudimentary sonified and visualized on the object itself, for verification of exactness, feedback to the user. It can be used instantly, but also for keeping track for longer periods of time. It can communicate with a WIFI router, and used in connection with other WindClock-III devices elsewhere in the world. It is sensing the wind speed and directions, the amount of rain, day and night, frost and heat, show barometer values, and all the changes over time. It can leave traces for interpreting catastrophes and disasters, always after the fact. It will be used to predict the coming weather, in a moment, tomorrow and a couple of days later, in the long run. (Technical sheet)

2. Talking about the weather (three groups)

A – For neighbours, families, friends…

When people are meeting outside, sometimes spontaneously they start to talk about the weather. From a description of the conditions now, to predictions for the coming days and longer, to statements about seasonal, and even longer time climate change, including socio-cultural issues. Yes maybe it will spill over in economical, social and cultural statements packaged as weather descriptions and predictions. Usually people start mixing it up with what they saw on tv. Together with informants and collaborators, let's collect interviews, field recordings, observations, and other audiovisual materials. Later these can be live processed and streamed during the broadcasting days. Though the radio weather descriptions and forecasts, are as much as possible real-time interventions.

Important to keep in mind when recording, are the following advises:

B – For artificial people…

A second bulk of information is to be obtained from contacts online. People write a lot, send pictures and recordings, chit-chat freely about almost everything. Usually when sending a picture of the weather outside others reply by sending a picture back, or describing the weather where they are. For instance, here it was freezing -15˚C and when mailing to friends in Brussels, Berlin, Bratislava, Barcelona, most of them replied with small descriptions of the weather there. Maybe, when you are bored, also ask them if they know any weather jokes? Remember Armand Pien, his whole career was full of bad weather jokes, he told one every day! Armand Pien (1920 – 2003) was a Belgian weatherman for 37 years. He was popular because his weather predictions were funny and somewhat cryptic. After he retired from national television he had a daily (Monday – Friday) weather talk on the East Flanders department of Belgium national radio. He did this until the Friday before his death; he died the following Monday.

C – For experts, ignorant or not…

There is too much information available online, and for now let's concentrate on the previously mentioned things, but when bored, it would be interesting to see how to access data from online weather balloons high up in the stratosphere, use data from online long-term forecast sites, explain strange weather phenomena, describe George Kuchar's Weather Diary Series, Joris Ivens' Histoire du vent, or cite from Andrzej Stasiuk's Dukla (a book about light). Or yes, talk about the Armand Piens elsewhere in this world.

3. Rendering the weather (making a radio without making a mess)

All agents involved should get together and discuss, from now on from time to time:

The timing, schedule for bringing in radio can be inspired by the Traffic Message Channel (TMC), which interrupts fm-transmissions, and bring urgent news about disasters (let's call it the 'KatastrofeMessageChannel (KMC)' for now). A new radio should try to come up with new time concepts and scheduling structures, based on the environmental conditions, whatever they are. The weather and climate conditions have to be an integrated part of this. (Isn't the weather an essential thing that we all share in this world, for living and communicating, for making art and all other things we feel good with?)

A question not to forget: can Tub0tech streams be actively used by then? (will sort it out soon with Dom/Jeff)

4. Reporting the weather (about the aesthetics of new radio)

to be extended –> time space and the weather!

Stylistics and forms [everyday time on air, take another style]:

Places (not more than 10, to be decided later):